On the 21st November, Ofgem announced its decision on the Targeted Charging Review (TCR) Significant Code Review (SCR) which looks at how some of the costs of the electricity networks are recovered.

The TCR will change the way the Residual Charge is collected, separating it from the Forward-Looking charge. This means that revenue is no longer providing a signal for people to avoid charges through behaviours such as load shifting or on-site and embedded generation. The change is designed to remove any unintended distortions and improve fairness in a practical and proportional way.

Transmission (TNUoS) and Distribution Charges (DUoS): A fixed charge will be levied on all final demand consumers with Domestic customers allocated a single residual charge and Non- Domestic customers segmented via a series of charging bands.

Example of band segmentation from the consultation: 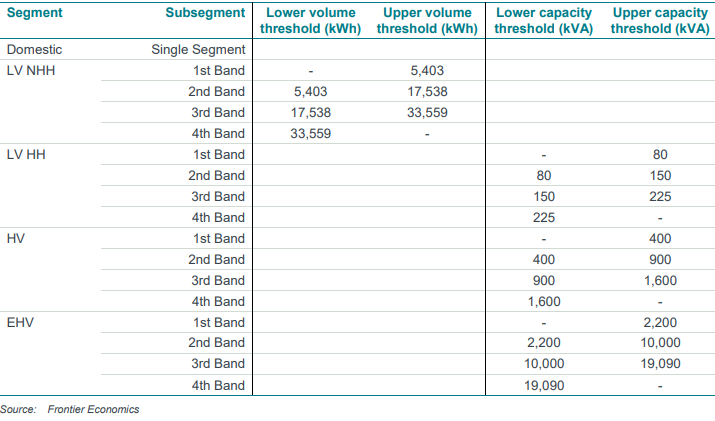 Balancing Services Use of System (BSUoS)

OFGEM has opted to apply a ‘partial reform’ to BSUoS by changing the demand base from net to gross demand at the Grid Supply point. This will remove the ability for suppliers to reduce their liability for balancing services charges by contracting with smaller distributed generators and exporting on-site generation.

Further to this OFGEM have opened a second Balancing Services Task Force to decide on further changes such as who should pay for BSUoS and how the value should be recovered.

The Transmission Generation Residual (TGR) will be set to zero to coincide with the removal of the embedded benefits, removing the benefit from transmission connected generators. The residual is negative and removing this will help reduce costs on TNUoS demand charges and help align all forms of generation. Implementation April 2021

OFGEM advise that average domestic households will pay less and Non-Domestic will pay more, especially those that currently avoid charging due to load shifting or on-site generation. Those that do not have the ability to change their behaviour may see some reduction in costs.

Costs will also depend on where they sit within each charging band, those at the top of the banding may see a reduction in costs and those at the lower end may see costs increase.

Overall OFGEM advise that consumers that may see cost increases in the short term will benefit from longer-term savings, compared to current charging methodology.