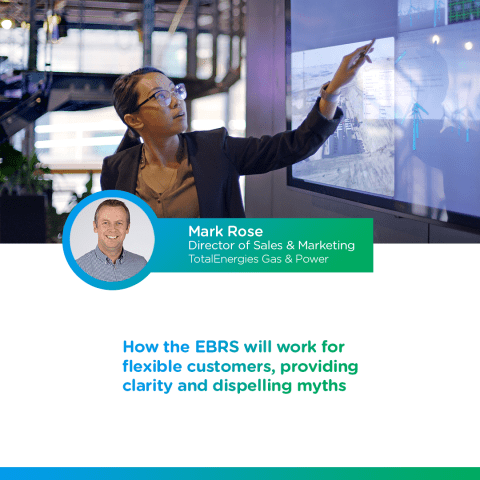 On the 21st September the government announced the EBRS providing wide ranging support to businesses. In my previous blog, I said that I and TotalEnergies Gas & Power are supportive of these measures given the scale of the challenge facing business over the winter period.
Since then, more details on the scheme have been released and confirmed, subject to legislation being passed in early November. Here I focus on how the scheme is going to work for customers on flexible contracts, and hopefully provide some clarity and dispel some myths.

•    It is important to stress that the EBRS doesn’t come into effect until the government passes the necessary legislation to enable it. This is slightly delayed due to parliament being in recess until the 11th October, at which point it will start going through the parliamentary process. Until the legislation is passed none of the details and figures can be treated as finalised.

How the discount will be calculated

•    If you are eligible for a discount it will be paid on the wholesale energy element (only) of your contract price, and eligibility will be determined on a monthly basis The wholesale element will be a blended rate for the energy consumed each month and will reflect each fix and unfix and the associated volumes covering that period, calculating a Weighted Average Price.

•    This will take into account all fixes and unfixes, including those made prior to the scheme and any gains made in unfixing volumes will be reflected in a lower Weighted Average Price.

•    The Weighted Average price will not include any fees relating to trading charges, volume tolerance breaches, premiums for shape/imbalance or any other similar charges.

•    The Weighted Average Price will be compared to the government supported price (currently 7.5p/kWh in gas and 21.1p/kWh in electricity) with the difference between the two being the level of discount provided. However, the level of discount is capped at 9.1p/kWh for gas and 34.5p per kWh for electricity. Please remember that these figures won’t be finalised until the legislation is passes.

•    An electricity customer has a Weighted Average Price of 52p/kWh for October. The difference to the government supported price is 30.9p/kWh so, this is the level of discount for October.
•    This discount is then applied at the Meter Point Level (MSP) for consumption in the October billing period.

The government has made it clear that customers should continue to manage their contracts and hedges in the same way they would have done had the scheme not been in place and should not make any changes to intentionally manipulate the levels of government support received. The legislation to enact EBRS is expected to include anti-abuse clauses to prevent suppliers and end customers additionally benefitting from the scheme to artificially increase the levels of support given. Doing so may affect a customer’s eligibility for the scheme.

Other clarifications
•    If you are billed on a reference price or flattened customer prices (based on already executed trades) the Weighted Average Price calculation should be based on the underlying trades for each billing period (monthly) and not the agreed billing price.
•    If you have physically sleeved Corporate Power Purchase Agreements (CPPAs) these will be included as part of your Weighted Average Price calculation (including sleeving fees related to converting the CPPA shape to baseload)
•    If you have related financial instruments in place to manage risks outside of physical hedges (e.g. CPPAs, financial derivatives, weather hedges etc.) you’ll be expected to be required to declare these and will have support adjusted to reflect the impact in the Weighted Average Price of these products.

There is no need for you to take any action, and if you are eligible the discount will be automatically applied to your October usage.

For further details you can view the government’s press release and the explainer document.

You can also find the latest information on EBRS by visiting our FAQs.